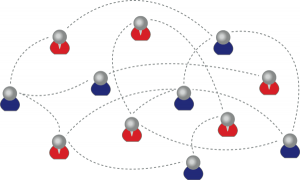 Based on a mash up of computer networking theory and the concept of six degrees of separation, network science is an emerging theory of marketing. It’s the building and utilization of a group of contacts whom you could help that can help you. The website LinkedIn is based on this concept.

To get started, you take inventory of your contacts, categorizing them into the following groups: customers, prospects, allies and friends and family. You then list your contact’s contacts into the same categories to understand how their contacts align with your goal. Once completed, you will have a good idea of what your 1st, 2nd and 3rd degrees of separation look like.

You will be surprised at how close you are to some pretty important people. For example, because of one client, we are two degrees of separation from Barach Obama, Oprah Winfrey and Sean Hannity, truly an interesting mix of people. We have a client that builds armored limousines for celebrities, putting us two degrees away from them.

Proximity may or may not translate into access. The quality of your contact’s relationships and their willingness to link you to their contacts will control your access. That’s why analysis is critical. If you identify your target and the purpose for being introduced, it will make it easier for the person being asked to say yes.

Your reason for contact can almost never be a sales pitch. You must find something that is compelling for the target that will also make the person referring you look good. Research your target. It’s critical to success. You must understand if your target will be sympathetic and if they have the ability to help you. If you do not make this determination and your meeting with your target appears to be a waste of time, it will be difficult to reestablish that connection later.

For example, Governor Jerry Brown is a man with a number of problems. He has a huge budget deficit gap and declining tax revenues to fill it. If I were attempting to get him to introduce me to various state agency heads to promote and sell my product, it’s unlikely I’d get a meeting. If however, I had an idea that could create a thousand jobs I would likely get his attention. Your reason to make contact must relate to some problem or cause in your target’s life or there is no reason for them to want to be connected to you. It’s a two way street.

This is perhaps the most important point of all is this: Tell your target exactly what you need from them or what action you want them to take. Be prepared to talk about what you want in great detail. Don’t assume that simply asking for what you want will be enough. I know the head of a non-profit that went to a local politician and laid out what she wanted to do, the resources she needed, the funding she needed and, going a step farther, not only told the politician what she wanted from him, but where he could use his influence to get the funding and resources. By knowing what was possible and giving the target a road map to follow, she made it possible for him to say yes.

Working your network will show you that you are connected to a bigger world than you think. You have many more resources and opportunities than you think you do.