We were privileged two Saturdays ago to be speakers at the Shark Boot Camp, an event that brought together former contestants of the iconic television program, Shark Tank, along with people who are interested in being on the program.

Shelly Ehler, whose product, ShowNo Towels, actually got three sharks in a fight over who would invest in her company, was the keynote speaker. She recounted losing first a successful business and then her house in the Great Recession. The idea of the ShowNo towel came from taking her kids to the pool and haunted her until she acted on it.

Like all of the contestants that spoke that day, she resisted the idea of going on Shark Tank until she was overwhelmed by one too many coincidences and decided to go for it. She never expected to make the cut, let alone receive investment interest.

After the show aired, there was a slight uptick in business, but not what she had hoped. The lack of results sent her into a tailspin until she realized that she had hundreds of emails from fans and well wishers telling her that she’d inspired them. It kept her going. Her business is still in operation and growing.

Then there was a panel of contestants: Michele Kapustka of Sendaball, Mike Robinson of Cuddletunes, Carmen Linder of Gotta Have S’more and Dorene Humason of The Chef In Black. They spoke of their experience on the show and had some interesting take aways for wannabe contestants:

It was this last point that each of the contestants came home to. They instructed the audience to look at the show as a marketing tool that would get their product in front of up to six million people. Mike Robinson, who had successfully launched and sold three companies before his appearance on Shark Tank plainly said that the deals that are offered on the program are terrible for founders and that they need to see the program for its marketing value, not as a source of funding.

We spoke on the importance of a business plan, something that was echoed by the former contestants. We coupled discussing business plan basics with how to visualize your business clearly and keep yourself motivated and on target as you launch your business.

It was apparent from listening to the stories that each of the contestants not only planned their businesses, they planned their appearances, they rehearsed their pitches; they agonized over every aspect of their tryout and eventual taping. What I was struck with was how hard each of them had worked and how prepared they were. 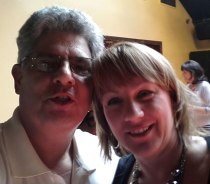 Michele Kapustka spoke about guerilla marketing and was absolutely hilarious. There were presentations by the producer of a radio program that features former contestants of the show along with Rey Ybarra, an author of a book on the subject. A valuation specialist, Pramond Patel spoke as well as a patent attorney. The point of the other speakers was to give potential contestants an idea of the information they need to assemble to be successful not just on the show, but in running their businesses.

Shark Boot Camp was a great experience. If you’re a fan of the show and want to know what it takes to make it to the small screen, be on the lookout for this event. There will be another one coming this September. 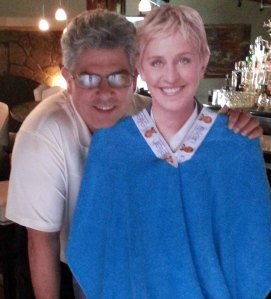 Ellen Degeneres was not at Shark Boot Camp in a ShowNo towel, but you can dream. – Ed.