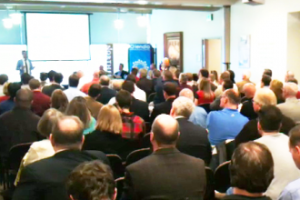 I have been hearing a growing drumbeat from angel investors that start ups shouldn’t waste their time writing a business plan. “They suck,” one angel investor told me recently, “Especially the financials. They’re clueless and it shows.”

His viewpoint was driven home with several tech start up coaching clients we worked with. The plans they brought to us did, in fact, suck, including incomprehensible financial pro formas.

Yet, the best run companies rely on written business plans. They revisit them frequently, adjust them to new realities and use them as guidance as they grow. We have seen this personally in businesses of all sizes and found that those that plan not only do better when things go according to plan, but also do better when the plan gets broken.

So who’s right? Why do so many entrepreneurs fail at drafting plans that angel investors are telling them not to bother? We believe it breaks down into the following reasons:

1. A business plan is a process, not a document – The majority of people writing business plans do so as a checklist item. The purpose of creating a plan is to test your business idea, surface issues and describe the resulting model. If you’re not going to learn from doing a plan, don’t do it.

2. The primary activity in creating a business plan is visualization– You need to see your business performing clearly in your mind, in as much detail as you can. Once you have done this work, the plan will essentially write itself. The sections of a plan are simply the buckets you drop the knowledge you’ve accumulated through imagination and research.

3. People don’t know what they don’t know– If someone creating a business plan has gaps in their general business knowledge, it will be amplified in the business plan. That is one of the main reasons to write one. Getting this exposure will allow you to get the assistance you need.

4. Sometimes it’s unclear how, and when, a company will make revenue – Entrepreneurs with pre-revenue companies and novel business ideas frequently have no idea how they will monetize them. When uncertain about revenue and earnings, focus on market size and how your business will dominate it. Nobody understood how to monetize Google or Facebook when they began, but it was obvious they were good ideas.

5. We expect expertise of ourselves in something we’ve haven’t done– Most people creating a plan have never written one. If fact, most don’t even actually understand why they need one. But because a banker or investor has asked them for a business plan, they expect they should be able to write one, with little or no help. This self imposed belief leads to creation of a lot unusable plans.

6. Poor research and writing skills – If you can admit this shortcoming to yourself, this is easily remedied by hiring a writer or consultant to work with you. Notice that we said work with you. Avoid anyone who says they can produce a meaningful plan by simply interviewing you or having you complete a questionnaire. Same goes for software. Even if you negotiate the software process, the best you will get are pages of jargon that will not capture the essence of your business model.

7. The value of a plan is not understood on both sides – For all the reasons listed above, the writers of business plans produce a poor product. In truth, if they understood that a business plan could help them make better decisions about launching their business, they would likely give it the care and attention it deserves. The same goes for the readers of business plans. Because they get bad plans to read, they just don’t want to be bothered with them. Yet, a good plan could put a lot of their concerns to rest while raising areas where entrepreneurs need guidance.

In the end, we get what we expect. If we expect that people will produce plans destined for the recycle bin, we’ll get them. If we, however, reinforce the power of a business plan as a visualization and planning tool; as an opportunity to see future problems and mitigate against them; if we value the business plan as the meeting place of entrepreneur, funding partner and supporting players, we will make them as good as they need to be.

People who think win more than those who go forth on the winds of chance. People who plan provide themselves a construct that serves them even if the plan should fail. A business plan is the tangible expression of your intellectual commitment to your business. Don’t believe the hype. Business plans are alive and well.