Pitches From Hell: The Scissor Man

Mrs. Mehit and I attended a Tech Coast Angels entrepreneur’s outreach event at Cisco’s campus in Irvine. The intent of the evening was to give those new to TCA a taste of how their process works. As part of the evening, participants were allowed to give two minute pitches of their business ideas to gain feedback from TCA and audience members. TCA had anticipated that four to six people would sign up to pitch. We heard from sixteen.

Some of the pitches were excellent. A few people were unfocused, but nothing that you wouldn’t expect at this kind of event. Everything was normal until the scissor man came up holding a plastic case folder. His product, a kind of safety scissor was aimed at parents.

“As a parent, we all want our children to be safe,” he said, while rummaging around in the plastic case file. “I know I have this picture somewhere….”  He trailed off, digging for the photograph. “You have to be careful with kids, because they’ll run with scissors.” Then he raised the picture he’d been looking for.

What did we all hear as children about running with scissors?: ‘You’ll fall down and put your eye out.’ The presenter now held high a picture of a child with a pair of scissors penetrating his face. As horrible as that sentence is to read, the picture was a 1,000 times worse. The room became electric and silent.

“Does he know that I can’t unsee that?,” Lydia turned to me, unable to look at the picture. The worse part is that he continued to hold up the picture while he extolled the virtues of his safety scissors. There were a few questions from the TCA panel. Finally, mercifully, the moderator asked the crowd if they liked the product. Crickets. Not a single raised hand. 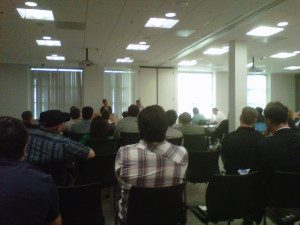